I’m thrilled to announce that my award-winning book will be narrated by the talented Lilian Wouters. Her voice is the personification of Agent Evan Tyler as well as the entire cast of LBD.

With her amazing gifts, Wouters is also in the production stage of Red Heels, the LBD Project, Book 2, and the third book, Bare Essentials, will follow.

Thanks for purchasing the audio book of Little Black Dress. Please be sure to leave an honest (and kind) review!

Infiltrating the Paris couture scene, Tyler and her team level their sights on Anton Hrevic, a rising star designer who, along with his muse-models, seems intent on espionage and world manipulation. Wearing the high-tech and top-secret Little Black Dress, Tyler uses both her God-given and government-granted assets to learn the truth behind Hrevic’s celebrity parties and uncover secrets that could unravel the global economy.

Leaning against the storefront of the Kirby Building on Main in downtown Dallas, I waited for the afternoon drizzle to let up before I finished my short walk to the Adolphus. I was wearing my red patent Loubies, and had no intention of letting either the rain or my terrible judgment ruin them.

This afternoon’s adventure was courtesy of my twenty-ninth birthday, which I spent alone in my loft with a six-dollar bottle of Prosecco and a handful of other bad ideas. The next morning, still holding a little buzz on my lips, I made the call and hired Cotten Hammond, Private Investigator. I didn’t have a real case. I had an adolescent crush.

When Dad passed away last year I took over the reins of the family business, Petra Energy Resources, as well as the Diane Pawley-Peters Memorial Women’s Foundation, named after the mother I never knew. Hammond was one of our donors, and I had the privilege of honoring him at the Foundation Banquet last month. He stood taller than I expected, with dark brown eyes and a jaw that could part a crowd. He balanced the obligatory black tux and white tie with a well-groomed five-o’clock shadow that emphasized his cleft chin. On top of everything else his handshake was firm, warm, and not condescending. I was in lust.

On that night of bad ideas, I devised my scheme. When I called the next morning, he assured me he knew who I was and that he’d help in any way possible. I explained that I believed I was being followed, maybe stalked. It wasn’t true, but I figured he couldn’t prove how I felt so I went with it. According to my scheme he would follow me around for a couple weeks, take a few pictures, and then give me his guarantee I was perfectly safe.

In the process, according to my rich imagination, he’d see my exquisite taste in food, friends, and fashion, and fall head over heels. I realized—about two hours and three aspirin later—that I had ruined any chance I had with the man by creating this ridiculous charade. That’s what I did, though. Meet a man, become infatuated, sabotage the relationship, end up alone with a bottle of bubbly. Rinse and repeat.

Ten minutes to four. I stepped back into the rain. I refused to be late for my follow-up appointment. It was a mistake, but I was going to look good making it.

Walking into the back lobby of the freshly restored office building, I did a little shimmy to lose the clinging raindrops and let my trench coat drop from my shoulders. On the wall between the modern staircase and the glowing brass elevator hung a digital office directory, on a loop with announcements and five-second ads. I checked my lipstick in the monitor’s reflection and noted that Hammond’s office was in Suite 202. To the stairs.

I froze in front of the stained curly-pine door and studied the hand-painted lettering on the obscured-glass panel. C. Hammond, P. I. By Appointment. Do I knock or just let myself in?

I reached for the brass handle but it turned when I touched it, and my hand instinctively drew back. I had to stifle my gasp, which spoiled any sultry entrance I might have otherwise made.

“Ms. Peters, it’s a pleasure to see you again.” His baritone was as deep as his eyes and as warm as his handshake. “Please, come in and have a seat.”

“Call me Ronni.” I nodded, and he directed me to a Bordeaux leather wingback on the client side of his mahogany desk. I drew a full breath as I entered, inhaling the sweet scent of Eastern spices and first editions. He took my coat and placed it on the hook by the door before he rounded the end of the desk and, with his eyes, asked me again to sit down.

I lowered myself into the chair and sighed. I let my lashes rise and fall a few times. I was all in. No confessions.

Drawing a deep breath, I simpered, “I appreciate your time, Mr. Hammond.”

“Please, you should call me Cotten. Can I offer you some water or a Coke or something?” He smiled, gesturing vaguely to the door behind him, but the crease in his forehead grew more pronounced. Something was off.

“No, thank you.” I crossed my legs and shifted forward in my seat—the most effective pose when wearing a faux-wrap dress. “I hope I haven’t wasted your time.”

He shook his head and opened the drawer at his knee. He maintained eye contact, but it was all business. My seduction foundered.

Placing a black file folder on his blotter, his gaze finally broke. He seemed to look me over for the first time. He released an almost imperceptible chuff and then sat back in his chair.

“Do you know the name Stephen Wexler?”

I took a moment to mentally flip through my contacts. “I don’t think so.” Before I could guess where his questions led, he slid a photo of a man from the file and positioned it in front of me.

“Maybe you recognize his face?”

The photo might have been a mugshot or an employee ID tag. A middle-aged man, with artificially orange hair, a black mustache, and bags under his eyes, stared dead ahead. A chill, maybe from the persisting rain, ran down my spine. I shook my head and pushed the picture back, touching only the corner of the photo paper with my fingertips. “No. I don’t know him.”

“You don’t know any reason he would be following you?” He stared as if he thought I might slip up, and he’d catch my lie. Maybe that was my guilty imagination.

“What?” I tried to do my part for the conversation, but my brain sputtered.

“This man, Stephen Wexler, has been following you for the last two weeks. At least, but who knows how long before that. You’ve never met him before?” As he spoke Cotten opened the file and spread out at least a dozen photographs of me, with Wexler somewhere in the background.

My mouth went dry, and every other part of my body broke into a cold sweat. I don’t know whether Cotten said anything else because, for the next several minutes, all I could hear was the pounding of my heart. My vision blurred. I blinked several times, trying to clear it enough to study the snapshots.

At the grocery store. At the park. On my way to work. In the lobby of my apartment. In each picture, Wexler was staring at me. There was no mistake. He knows where I live. Where I work. Where I do everything. I had no idea I was actually being followed. I never even caught a glimpse of Cotten in the last two weeks.

I leaned closer to the photos, hoping to see a mistake. It wasn’t me in the pictures, or it wasn’t Wexler. But it was. I looked up at Cotten, who was suddenly turned sharply on his side. His arms reached out to me across the desk, and I heard him calling my name from far away. “Ronni. Ms. Peters!” All at once, someone turned out the lights. 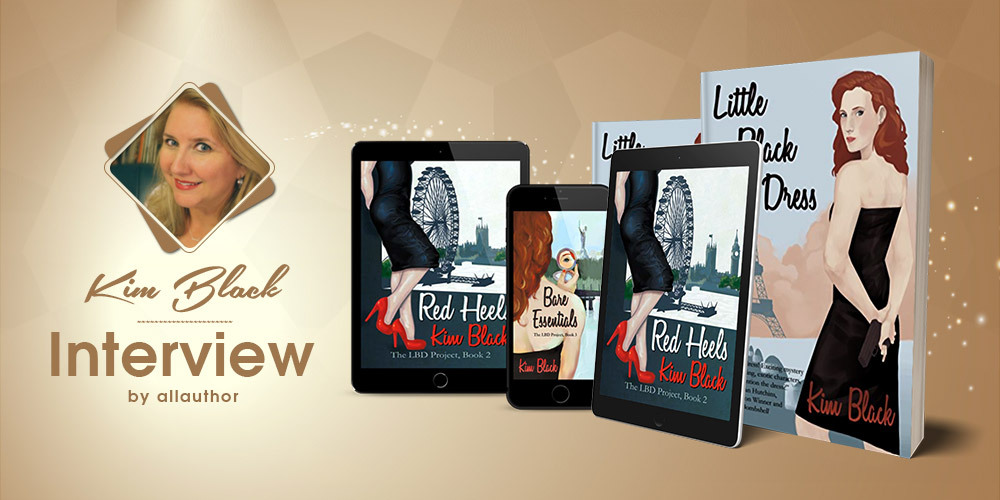 Kim Black started working toward writing full-time about ten years ago. Kim Black knows how to create believable characters and develop a story that keeps you going until the very last page. Writing “Little Black Dress” was a long but joyous experience for her. She spends lots of time with my family and close friends, and her intrepid bodyguard, Archie. Read full interview…