He’s hot right now. James Franco is an actor’s actor. He adds another dimension to a whole Spiderman series. He steals a scene from Steve Carell and Tina Fey in Date Night—a difficult feat in itself. He shares his love on General Hospital. He carries Oz The Great and Powerful.

I’ve seen interviews with him, and he impresses me. He enjoys acting, and seems truly grateful to be part of the entertainment industry. He loves to work, and it shows. He seems to embody the idea of “no small parts.”

My family has a few “Inside” jokes about him. When I told the boys we were going to see Oz, my older son says, “Wow. He’s amazing—being able to be portray the Wizard with only one hand!” He was, of course, referring to Franco’s role as Aron Ralston in the 2010 movie, 127 Hours, a true story about a mountain climber forced to cut off his own hand to survive in the Utah wilderness.

My younger son refers to other actors that he calls “Fake James Francos,” like the young Theo James, star of NBC’s new series Golden Boy. The Franco look-alike claims (as his character) to do 6000 push-ups a day. We laughed at that. My son says things like, “How can he say that? Only the real James Franco can do 6000 push ups a day.”

Franco is a hard working man. Besides being in every theatre across the country, IMDb.com shows that he has ten projects in either pre-, active, or post-production. What that says to me is that the REAL James Franco is a man to watch.

If you’d like to see any of the movies mentioned above, just click on the pictures for a link to watch or purchase.

To purchase a copy of my children’s book, Pockets, I’ve provided a quick link to amazon.com. Thanks!

“Look at this, Mom! Alexander Hamilton looks like the guy from Terra Nova.”

I took a quick look at the crisp ten dol 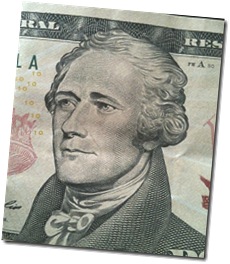 lar bill I was about to use to pay for pizza, and found that, indeed, Jason O’Mara does bear a strong resemblance to the United States’ first Secretary of Treasury. 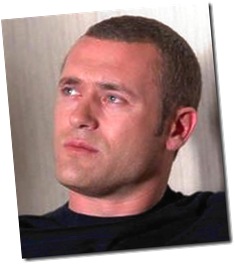 and Alexander Hamilton from a ten dollar bill.

In recent years we’ve had movies about Lincoln, Washington and Adams, but not much has been presented about the man who died in a pistol duel at the hand of Jefferson’s former Vice President, Aaron Burr. Perhaps when I’m finished with the novels I’m working on, I’ll begin a screenplay about Hamilton’s story. With Irish actor, Jason O’Mara, my preferred lead for the cast, of course.

Jason O’Mara is hot right now—not only in looks, either. He is super-talented and in-demand. He currently plays the younger brother, Deputy Jack Lamb, to Dennis Quaid’s Sherriff Ralph Lamb on CBS’ Vegas. Last year he played Joe Morelli in One For the Money, an adaptation of the popular Stephanie Plum novel by Janet Evanovich. He also took the lead as Jim Shannon in Fox’s Terra Nova.

If you’re not watching Vegas, you should be. It’s for anyone who likes cowboys, mobsters, and smart women. It’s got a meaty story set in retro Nevada. The cast is top-notch and the fashion and set design are impeccable.

I predict that O’Mara’s star will only continue to rise. He skillfully handles a leading role as well as meshing nicely into an ensemble. He’s tough enough to be a man’s man and funny and sensitive enough to endear the women.

I wonder how he feels about powdered wigs…

To check out the films mentioned above, click on any of the titles for a link to see more and purchase! Thanks!

When do you know a movie is successful? When it transcends a
single two hour event and gets a weekly invitation into our living rooms.

Dozens of movies step from the big screen to the TV Guide,
for many different reasons, and with just as many results.

For some movies, the audience simply demands more, and the
producers eagerly capitalize on that thirst. Star Wars: The Clone Wars, The
Young Indiana Jones Chronicles, Dirty Dancing, and Clueless
come to mind.

Some films, like The Highlander and Stargate,
present an intriguing character or plot idea that allows television producers
to develop in ways that a single film could not.

A few movies inspire TV series with their popular theme. The
Pink Panther cartoon was less about the bumbling Inspector Clouseau, and
more about a cool pink cat. Stalag 17 inspired Hogan’s Heroes as The
Great Race did the same for the Wacky Racers cartoon series. Though
neither series included the movies’ cast of characters, the basic plots
continued, but adjusted for a family audience.

Lots of movies share the distinction of jumping from theatre
to TV, such as The Ghost and Mrs. Muir to La Femme Nikita.
However, two other series stand out on my list.

In Buffy, The Vampire Slayer, writer Joss Whedon
takes advantage of the small screen to perfect his characters as he—and his
audience—preferred. Though the feature film was popular, most critics regarded
it as camp. Most of the Buffy fans that I know, disregard the movie
altogether, but I think that’s a shame. I absolutely adored Paul Reubens’ death
throes. That scene makes the movie for me. The television series dropped the goofiness (mostly) and kept the wit
and humor. The success of the series eclipsed the original film.

The real success story though, is a series that broke all sorts
of rules. In the 1970 film, M*A*S*H*, creator Robert Altman told the
story of a US Mobile Army Surgical Hospital during the Korean War. The film
made a pointed statement on the heels of the Vietnam War.

In 1972 the producers of the TV series took that idea and
transformed a talented ensemble cast into a family. And the funny thing is, for
eleven years they became part of our family, too.

Though reportedly Robert Altman hated the series, the weekly
show defied typical television rules. In the first season, M*A*S*H*
finished forty-sixth in the ratings. Every year the show improved its
standings, and by the eleventh and final season, finished number three. The
series finale broke all TV records for ratings.

The core cast underwent a few adjustments over the years,
and dozens of guest actors eventually became stars. The story lines, many of
which were inspired by real-life soldiers’ accounts, developed the characters
into people for whom we sincerely cared.

Though the show was set in South Korea, the stories focused
on relationships. We laughed at Klinger’s dresses. We cried when Henry Blake’s
flight home was shot down. We worried about Hawkeye’s drinking, womanizing and
cynicism. We made bets about BJ’s real name. We loved to hate Frank Burns and
sometimes hated to love Hot Lips. Radar’s ESP amazed us while his teddy bear
endeared us.

At times it seemed the cast took turns making us cry. After all, it was war.

If I had to pick a TV series (from a movie) to recommend for you to see, it would be M*A*S*H*,
but then again, M*A*S*H* may be my all-time favorite television series.

That’s a wrap for this Toast to Cinema! Tell me your favorite M*A*S*H* memories, or tell me about a movie/ series that you love!
Thanks for reading!