We all loved her.

Last year ran roughshod over my list of Hollywood Heroes. From start to finish, David Bowie to William Christopher, we’ve all lost some of our favorites. But for me, Carrie Fisher’s passing probably hit the hardest. Was there anyone who didn’t love her?

She ushered in a new age of Princess. She took that character genre from damsel-in-distress to kick-butt hero. She was sassy, smart, smart-mouthed, skilled, and stunning. And this is before she ever stepped in front of a camera. She was honest, brutally so, about her struggles. She was willing to step from the shadows, rip off her bandages, and show us her scars.

How best to honor her?

As a writer, I hope to honor her memory by infusing my “princesses” with her strength and presence. I want them to have vulnerabilities to face, mountains to climb, partners in passion, and character oozing from every pore. I want them to defend the less able and champion the righteous cause. I think Ms. Fisher would appreciate that. I think that’s the legacy she’d like to leave.

The Princesses next in line?

From the moment I first saw her on screen, I decided I needed to let my hair grow long enough for the bun-do and then the braids. I had grown up with tall, blonde, Barbie-type princesses, and she was a short brunette. Yay! I hope that the role models for tomorrow’s princesses will buck the trends, not just for the bucking, but to send the message that buying into the mass-production idea of beauty will never bring happiness. Happiness is a decision. It is a condition of contentment and reconciliation with one’s own actions and responsibilities. It will never be a product you can purchase or a sheep-like trend.

Carrie Fisher let us know, in no uncertain terms, that growing up as a Hollywood Princess didn’t make her the happiest girl in the kingdom. I want the next generation of role models to be grounded in reality, willing to show their flaws without making excuses. She embraced the role of princess, but not without disclaimers. She showed both that she could be romantic and rough at the same time.

Ms. Fisher requested of her obituary, “I want it reported that I drowned in moonlight, strangled by my own bra.” 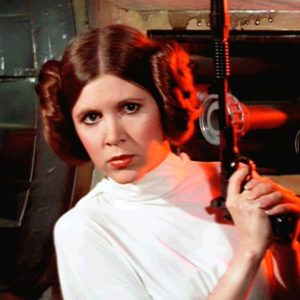